It is Well With My Soul

In 1871 in the city of Chicago was nearly destroyed by fire – [known as the Great Chicago Fire, 300 people died and approximately 100,000 were left homeless. One of the heroes in the aftermath was Horatio Gates Spafford. Spafford, who was an attorney, had lost a great deal of real estate in the fire.

Despite such great personal financial loss and then combined with the untimely death of his son during the same time Spafford for nearly two years unselfishly helped to assist the needs of the homeless, impoverished, and grief-stricken by the fire.. Such merciful and kind acts as these to his fellow-men just helped to strengthen the testimony as to why Horatio G. Spafford was known throughout Chicago as a sincere, devout Christian.

After about two years of such work, In November 1873, Spafford and his family decided to take a vacation. Because Spafford was a loyal friend and supporter of Dwight L. Moody, he and his family decided that they would meet up with Moody on one of their evangelistic campaigns in England. Just as the Spafford’s were preparing to leave, Horatio was unexpectedly detained by urgent business concerns in Chicago.

The decision was made that his wife Anna and their daughters Annie, Maggie, Bessie, and Tanetta would continue on as scheduled to England. Once after Spafford had resolved the business concerns he would then catch up with them on the other side of the Atlantic Ocean.

The ship his wife and daughters were traveling on never reached England. Off Newfoundland, the ship collided with an English sailing vessel. The ship sank rapidly, approximately within 20 minutes after it was struck.. Mrs. Spafford was only one of the 47 to survive; tragically all four of their daughters were part of the 226 who perished in the aftermath. Anna Spafford’s heartbreaking telegram to her husband simply read: “Saved alone.’
Horatio immediately set sail for England to join his grief-stricken wife. As the ship that he was traveling on passed the approximate location where his daughters had drowned, [it is reported] that due to his deep sorrow mingled with his unwavering faith in God’s goodness that he penned the words of his famous hymn – “It Is Well With My Soul.”

It Is Well With My Soul
When peace like a river attendeth my way,
When sorrows like sea-billows roll,
Whatever my lot, Thou has taught me to know;
“It is well, it is well with my soul.”
Tho’ Satan should buffet, tho’ trials should come,
Let this blest assurance control,
That Christ hath regarded my helpless estate,
And hath shed his own blood for my soul.
My sin – oh, the bliss of this glorious thought!
My sin – not in part but the whole,
Is nailed to His cross and I bear it no“more;
Praise the Lord, praise the Lord, oh, my soul.
And, Lord, haste the day when the faith shall be sight,
The clouds be rolled back as a scroll,
The trump shall resound, and the Lord shall descend –“Even so – it is well with my soul.”
For me, be it Christ, be it Christ hence to live,
If Jordan above me shall roll,
No pang shall be mine, for death as in life
Thou shalt whisper They peace to my soul.
It is well, it is well with my soul.”

Excerpt From: Lawrence Jackson I. “The Fruit of the Spirit.”
Posted by Pastor Rev. Ray E. Owens at Wednesday, July 03, 2013 No comments:

Email ThisBlogThis!Share to TwitterShare to FacebookShare to Pinterest
Labels: Fruit of the Spirit, Horatio G. Spafford, It is Well With My Soul, lawerence Jackson, Peace 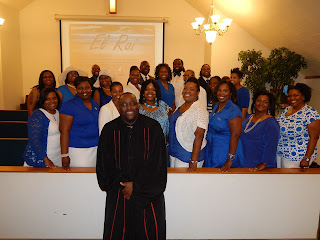 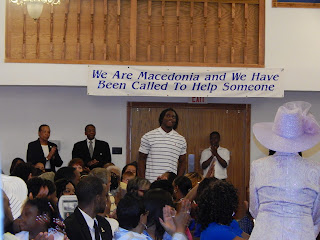 Glad to be back in this forum with you.....it is has been awhile! Thank you for the emails, calls and inquiries concerning the whereabouts of our blog. Lots to catch up on but simply put, GOD IS GOOD. He has been blessing our Church and the ministry keeps us moving.

On Sunday we graduated our third Sunday School Christian leadership School group who studied #1004 Effective Bible Reading. We praise God for 38 students who completed the course. Special thanks to our instructor for this class, Sister Angelia Forrest. We begin the Baptist Doctrine class next week where I will have the honor of teaching for the next 8 weeks,

On Sunday, our church was blessed with special guests, The members of Zeta Phi Beta Sorority and Phi Beta Sigma Fraternity. We bless God for their presence. We were also blessed that Coach Ernest Jones of the University of Notre Dame Football team brought with him Jaylon Smith who is the number one player in Notre Dame's recent signing class as a Linebacker.

Coach Jones is the Director of Player Development and Engagement. Our church tries to help student-athletes make the transition to South Bend and partners with families who send athletes to a Catholic school but are not of the Catholic faith. It was an honor to meet this young man.

I began a series of sermons on EL ROI, THE GOD THAT SEES from Genesis 16:1-16 using Hagar as our witness to teach us about another attribute of God. It is impossible to know what God can do for you unless you really know who he is. Since you can't divorce God's name from His nature, what He is HE will do.

The sermon was received well. I felt I was rusty and too academic in my presentation but the Church and visitors was blessed. My goal every Sunday is to give the listener enough information that they should leave church ready to put the sermon they just listened to into action by writing and living the sermon in their own words in the company of people who weren't at church but still need a word.

The main point of Sunday's message was, "Don't throw away your future because of mistakes you have made in your past"! The account in Genesis shows us three different people's reactions to handling failure. The reality in life is WE ALL FAIL! Some people try and deny it, cover it up, lie about it but WE ALL FAIL!

How do you handle your Failures? Abram failed as a Man! In tradition we blame Sarai for introducing the deceit of sleeping with Hagar but in reality the failure rests with the man. Simply put, Abram is the one that introduced sin into his house. He taught his wife how to lie by example. Genesis 12:11-13. His lie benefited him in sheep, cattle, goats, donkeys, male and female servants.

Abram's lie is the beginning of Hagar being brought into his home. It stands to reason had Abram never lied in the first place, there is no Hagar for Sarai to suggest to sleep with. It is impossible to ever enter into sin and expect to come out clean. There is always some residue effect left behind.

When this failure hits Abram, his response is to be UNACCOUNTABLE. He simply acts like its not his fault. This is a fight between Hagar and Sarai. In the playground, we would say something like My name is BENNET AND I'M NOT IN IT.

Sarai failed as a manager of the home. She made the mistake of trying to HELP GOD. God has promised Abram a seed will come but its been ten years since the initial conversation and still there is no child. She decided that God is moving to slow so she would help Him, We often times are guilty of the sin of trying to play GOD in our lives and we substitute our Isaac blessings with Ishmael Burdens.

Sarai's response to failure was being UNREASONABLE. She blames Abram, she blamed Hagar, she even blamed God but she never took responsibility for her own actions. She spoke with an Unbridled tongue and an Unleashed temper. Many homes have been wrecked by women with a runaway tongue and an uncontrollable temper,

Hagar failed as a Maid. She began to see herself as the wife instead of realizing she was just the maid. Just because you sleep with the husband, it doesn't make you the wife.When reality kicks in Hagar decided that the answer to her problems was flight.

Hagar's response to Failure was to become UNAVAILABLE. She just packed up and left to get away from the problem. This is the most common response of all! When problems arise at church, don't seek a solution, seek a new church. When problems arise on the job, don't fix it, find a new job. When problems crop up in the marriage, don't work it out, just find yourself a new mate.

I end today's blog by simply saying when we fail, no matter how we choose to deal with it, thank God there is still a God who sees. He sees where we run, where we hide, where we flee, where we escape. When we don't look for HIM, HE comes looking for us. Gen 16:7 The Bible says the angel of the Lord found her.