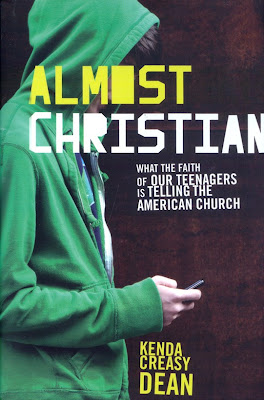 I began this week driving with fellow pastors down to Louisville, Kentucky to attend school at The Southern Baptist Theological Seminary. I must admit I feel and have felt like a fish out of water because in the "religious talk and jargon", I know the information and I belong in the school but it does seem like everyone else is on a "DSL CONNECTION" while I am on "DIAL-UP".
Its a three to three and half hour drive one-way to get to school so it provides a lot of time for reading, sleeping or conversation. The conversation is the car was about "Moralistic therapeutic deism", not normal religious jargon I use day to day.
One of the Pastors is a Youth Pastor and is going after a Master of Arts in Youth and Family Ministry. In his Program Development and Planning Youth Ministry Class, this concept came up.
Many church members do not expect much from their youth pastors or don't even have a youth minister position. It is seem as a position to help keep our children away from drugs, prevent pre-marital sex, and exhibit good moral behavior. We feed them everything but many times forget to "FEED THEM THE WORD OF GOD". Pizza parties, hot-dog and Hamburger cook-outs, doughnuts in the morning and candy and snacks in the evening but are we feeding them the real food.
One of the textbooks for this class that I had the chance to read on the way down and back to school contends that churches are teaching a "mutant" form of Christianity. The author contends American teenagers are embracing what what was termed "Moralistic Therapeutic Deism which is to say, "It's a water-down faith that portrays God a a "Divine therapist" rather than Lord and Savior, whose chief goal is to boost self-esteem".
We must teach our children more than just how to feel good or do good, we must arm them with what which is good from the Word of God. Pizza, Hamburgers and Doughnuts may get youth into the building but Pizza, Hamburgers and Doughnuts will not be able to answer the questions of Why did my mother and father get divorce? Why did my best friend commit suicide? Why did my best friend die of an asthma attack after smoking a blunt once?
We can't be afraid or ashamed to teach our youth the Word of God. They can understand, they can relate, they can remember it, in this we truly demonstrate they are the church of today. We need more than pizza!
Owens
\
Posted by Pastor Rev. Ray E. Owens at Friday, August 27, 2010 1 comment:

This week I am one of many instructors for the 31st Annual District Congress of Christian Education for the Northern Indiana Missionary Baptist Educational District Association. The assignment was given me to teach the Gospel of Matthew 28 in three days. I must say I was very disappointed that the district only committed 1 hour to Christian Education in a teaching format while allotting 2 hours for preaching.

As the State President of the Congress of Christian Education, I will try and yield an influence on our District President to try and find more time for teaching as it is a necessary and vital part of the believer's growth. We found a great outline from a new commentary called Opening Up Matthew, I.D. Campbell Leominister: Day One Publications 2008

Pray for us this week, we will post quick highlights of class.

Email ThisBlogThis!Share to TwitterShare to FacebookShare to Pinterest
Labels: Congress of C.E., Matthew 25:31-46

Today, the New Hope Baptist Church in Oklahoma City, Oklahoma where Rev. E. J. Tyson serves as Pastor will be observing the Home going Services for their chairman of the Deacon Board, Deacon Samuel L. Richardson, who is also my best friend's father. I am saddened that my schedule will not allow me to be there with the family but grateful that God allowed me to be with them the night God called him home. As only a good deacon can, the moment the hospital released Pastor Tyson and sent him home, God released Deacon Richardson and sent him to his eternal home. He was 92 years old and didn't look a day over 70.

Time and space won't allow me to be with New Hope so I send this devotional. Out of a broken heart after his wife and newly born son had both died, Thomas Dorsey cried to his Lord to lead him "through the storm, through the night" In doing so, he created lines that have since ministered to others in an unusual way. This tender song, written by Thomas A, Dorsey in 1932, has since been a favorite with Christians everywhere.

As he began to be successful as a composer of jazz and blues songs, however, he drifted away from God. After it seemed to him that he was miraculously spared in brushes with death, Dorsey came back to the Lord. As his life dramatically changed he began to write gospel songs and to sing in church services. It was during a revival meeting in St. Louis, Missouri, that he received a telegram telling the tragic news of his wife and infant son. Stunned and grief-stricken, Dorsey cried, "God, you aren’t worth a dime to me right now!"


A few weeks later, however, as Dorsey fingered the keyboard of a piano, he created the lines of "Precious Lord" to fit a tune that was familiar to him. The following Sunday the choir of the Ebenezer Baptist Church in South Chicago, Illinois, sang the new song with Dorsey playing the accompaniment.

Planting Seeds is a Boring, sometimes brutal and back-breaking job that often times can blind us into missing the benefits of seed-planting. God help me to see the blessing in planting seeds even if I never see the harvest of the seeds planted. Please God Help!

This is a sobering reminder that life changes in a flash. It also serves as a wake-up call for many of us that are blessed to serve in ministry. We give all we have in preaching expending all of our energy in the service of the Lord. We preach two sometimes three times a Sunday. Revivals, Anniversaries, Annual days, convention work, district work, hospital visits, office meetings, vision casting, meaningless and mundane meetings that have nothing to do with ministry but rather are maintenance; in the process of all this, we don't sleep like we should, we don't eat right, always on the go, either forget or don't take our medicine on schedule and God has to allow something to happen to get our attention.

While praying for Pastor Tyson, today I am praying for all ministers who serve in the field giving their all; I am praying we will start listening to our bodies, paying attention to the signs, learn to obey God, spend more time with family and as silly as this will sound, slow down long enough to enjoy the journey and walk with God.

Sometimes we trick ourselves into thinking it won't run without us. If we were to die tomorrow, they would be thinking and calling for our replacement the next day. I will hug my girls a little longer today, I will reach out to my brothers in the ministry and encourage them today. I will sit down today and remain still. I will commit to once again becoming disciplined in taking care of my health, removing this extra weight and following my doctor's instructions.

Running to go sit down, 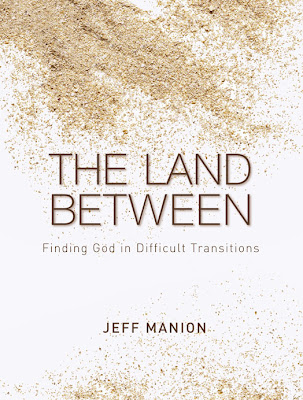 I was going to the bookstore today simply to see if Max Lucado's new book was out "Outlive your Life". While there I picked up Hybels' book, "The Power of a Whisper" but I am overjoyed to say I ran into a book and author, I was unaware of but this book has blessed me. It was a quick read but left a powerful impression with me.
The book is by Jeff Manion who pastors in Grand Rapids, Michigan and the book is The Land Between, "Finding God in Difficult Transitions". I highly recommend adding this to your library and the next time you are on a plane or have a trip, read it and it will bless you.
Manion says, "The Land Between is where life is not as it once was and where the future is in question, its the land where everything normal is interrupted by "one sentence":
Your position has been eliminated
I don't love you anymore
The tumor is malignant
The church is meeting to take a vote of confidence
Mom, Dad, I'm pregnant
I'm having second thoughts about the wedding
Your mother and I are getting a divorce
Mom has been rushed to the hospital, how soon can you get here?
"In one sentence we are ripped from normality and find ourselves in a new world, BETWEEN. In our more faith-filled moments, we know that we will regain our footing and find some kind of balance in a new normal, but for now we are simply and suddenly "BETWEEN" and at a loss as to how to navigate the terrain".
Manion uses the Biblical story of the Israelites' journey through the Sinai desert as a metaphor for being in an undesired transitional space. Transitions are our greatest opportunities for spiritual growth because in our chaos and emotional upheaval, God desires to meet with us the most.
"The Land Between is fertile ground for our spiritual transformation and for God's grace to be revealed but it is also the place where we can grow resentful, bitter, and caustic. The same wilderness where faith can thrive is the very desert where it can dry up and die if we are not watchful".
It has been a long time since I sat down and in one setting, read a book form start to finish but this book blessed me and I hope it blesses you as well. The next time I run to Grand Rapids to the Baker Book house, I will stop off at the Ada Bible Church and meet this pastor/author.
Owens
Posted by Pastor Rev. Ray E. Owens at Friday, August 06, 2010 2 comments:

Email ThisBlogThis!Share to TwitterShare to FacebookShare to Pinterest
Labels: Jeff Manion, The Land Between

The Luggage of Life

Special thanks to Sister Bonnie Willis, the director of our Fine Arts Ministry and all the members of the Macedonia Church for their open spirit to the "living Sermon" that was given Sunday. The idea was given to me by God on Monday, shared with Sister Willis on Wednesday, participants were chosen Thursday and Friday, production meeting was Saturday that amounted to me preaching the sermon to them and they served as a listening panel or advisory board and we shared it with the church on last Sunday.

I admit this concept will not be for everyone or for all churches. I will understand that many people will think this is un church-like or completely unnecessary. All I can say is God gave it to me and I followed what He showed me.

Disclaimer: To my mother who reads my blog, the mothers of the church are doing a great job keeping me reigned in; however, I got out of the restraints Sunday and said a couple of words you will not like. I am back under control.............................for today.